Blockchain breakthroughs that are changing the airline industry

While the applications of blockchain for aviation are still in their infancy, 59% of airlines are investing in the technology with pilot or research programs already in place, which is up from 42% from 2017, according to SITA's 2018 Air Transport IT Insights report. Airlines currently rely on intermediaries for storing and sharing passenger and operation data. This includes passenger and sales data, reconciliation, and baggage information stored in silos that do not communicate with each other. Blockchain is here to remove that barrier, decreasing provider's reliance on intermediaries and enabling faster automated transaction processing, real-time information sharing, and minimal system maintenance.

In our first blog, Blockchain Breakthroughs That Are Changing Travel and Hospitality, we covered how blockchain travel applications bring tremendous benefits like autonomous aggregation and maintenance of contracts and records, cost-effective distribution management, and easy verification for faster service delivery. In this blog, we will dig deeper into blockchain travel applications specifically for the airport and airline industry.

There are various touchpoints from booking to arrival that include the airline, online travel agencies, banks and card providers, and government agencies. Each touchpoint collects and stores data in siloes making data exchange choppy and airlines vulnerable to mistakes. Blockchain enhances reconciliation and data sharing by storing all travel data in its decentralized ledger, so all information is updated and accessed in real-time. Airlines can take advantage of this by tokenizing tickets. Airline tickets are currently either paper-based or electronic.

Blockchain tokenizes electronic tickets via smart contracts, completely eliminating the need for antiquated, paper-based tickets. The airline can then create its own set of business logic and conditions for how a ticket is sold and used, which enables tickets to be sold in real-time from different partners across the globe.

This keeps data sharing errors at bay, and the airline can focus on revenue generation while reducing costly fees paid out to intermediaries. For example, Russia's biggest airline, S7 Airlines, and largest private bank, Alfa-Bank, are already issuing passenger tickets via blockchain with the goal of streamlining its payment process and reducing settlement times that currently take about two weeks to process.

The control airlines have on cargo logistics is minimal. The majority of handlers are partners that have their own mix of manual and automated processes. These non-standardized processes between intermediaries and airlines form weak links on the supply chain ranging from stolen baggage to contraband.

This is where the power of blockchain comes into play. Each phase of the luggage or cargo process, from origin to recipient, handled by the airline creates a unique code. Any alterations, additions, and subtractions of products and baggage can then be easily identified and updated on blockchain. However, synchronizing all that data on a global scale can create network traffic congestion. Because blockchain is decentralized, there is less reliance on the network bandwidth to address all this synchronizing. This transparency is important in preventing unauthorized action and helps airlines reduce smuggling and theft, achieve faster processing time, and reduce paper-based processes.

Just as smart records are used as a digital wallet that store travel data such as flight tickets, hotel reservations, and other information on blockchain, airlines can use the technology the same way to track the airline cargo lifecycle. This impact of this for baggage tracking is significant for airlines, as at least one out of every 200 passengers feel the impact of baggage loss or delay annually.

For airlines, this amounted to nearly $2.3 billion in excess costs in 2017, according to the 2018 SITA Baggage Report.  The digital ledger tracks luggage at critical checkpoints throughout the trip: starting at initial handover, when the bag is loaded onto the airplane, at delivery to the transfer area, and finally, upon return to the passenger. This ensures a smooth handoff between teams and helps quality assurance determine where misplaced luggage is and who is responsible. This can save the airline industry billions in excess costs and add an additional security layer to the baggage tracking process.

Blockchain has the potential to cut out the middle person standing between an airplane and a needed part. Parts change custody numerous times -- between the airlines, service providers, manufacturers, and traders -- each logged in separate databases or worse, bulky manual binders. Blockchain digitally logs and stores part and maintenance data each time a part is handled, moved, or a maintenance activity occurs. This electronic trail of activity creates accurate and instantly accessible records that speed up the due diligence process and easily expose nonconformity, resulting in safer planes, more secure data storage and processing, and improved maintenance events.

S7 Airlines, truly ahead of the curve for blockchain applications in aviation, became the first airline to leverage blockchain to speed up the aircraft refueling process. The blockchain-based application displays real-time data on a shared ledger with all participating parties: the fuel supplier, Gazpromneft-Aero, the bank, Alfa-Bank, and the airport, Tolmachevo International Airport. On this decentralized, digital ledger, fuel demand is accessed and the payment is conducted on the network. The invoice is then digitally generated via the smart contract. With the goal of speeding up the refueling process, this airline reported that the entire process takes 60 seconds and eliminated various manual operations. It's safe to say this mission was accomplished, and we should expect to see more of these pilot programs and testing over the new few years. SITA, a conglomerate of air transport industry members with a remit to solve common airline industry issues, launched an Aviation Blockchain Sandbox in early 2018 to experiment with the various use cases for blockchain technology within the industry.

Data sharing can be somewhat disjointed in the airline industry with information stored on different databases. Your phone app may say that your flight is on schedule, while the departure board says an hour delay, yet the airline staff announces that the flight has been postponed by a day. Enter blockchain, a single, accurate, and real-time source for data. Storing flight data in one place minimizes the misinterpretation of or inaccurate data. By using smart travel record principles, the real-time availability of flight information is shared with all parties involved.

NASA is already examining if blockchain is a fit regarding privacy and security of flight data, reported by Coindesk.com. A January 1, 2020, mandate of the Federal Aviation Administration (FAA) will require aircraft operating in most controlled US airspace to use Automatic Dependent Surveillance-Broadcast (ADS-B) technology. The technology uses satellite navigation to publicly broadcast aircraft identities, positions, destinations, and other critical flight data. This raises the concern of privacy and security for military aircraft traffic data. NASA is exploring the use of a blockchain-based application, dubbed Aviation Blockchain Infrastructure (ABI), that uses Hyperledger Fabric and smart contracts to determine what data is shared publicly or privately. While this technology has a long way before it makes its way into the mainstream, the approach is based on available technology that lets members conduct private and confidential transactions and also co-exist with more restricted members on the same blockchain-based network. 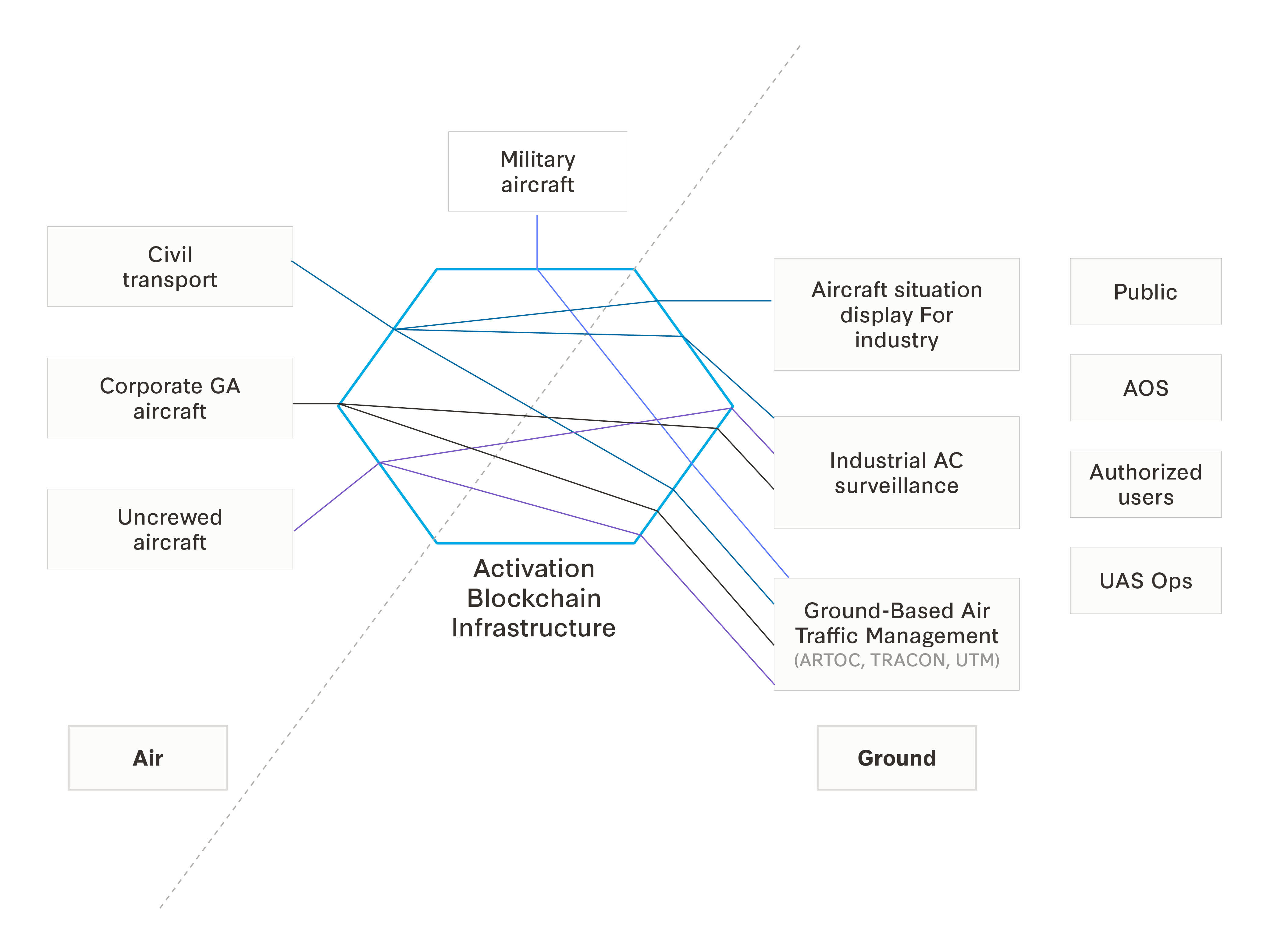 Blockchain creates a transparent, accurate, and reliable leger for digital transactions that allow airlines to perform operations and tasks more efficiently. Freeing up staff time from cumbersome, manual-driven tasks speeds up the pace and accuracy of operations that can significantly ramp up asset utilization and allow staff focus on more important tasks like expanding revenue streams and improving customer experience. As blockchain innovation continues to take flight, we may be on the verge of full-scale adoption across the industry within the next few years. Is your organization ready?

Check back soon to see the next four ways blockchain is transforming the hospitality industry. Until then, click here to see how to stay at the forefront of the technological innovations impacting travel and hospitality.

Anything that pays intelligently: an ecosystem of connected devices

What does the future hold for connected devices and autonomous payments? Explore the opportunities with an anything-that-pays model.