Ubiquitous high-speed connectivity, smart devices and availability of extensive OTT content are enabling a fundamental shift in consumers video consumption behavior from "watching what's on" to ‚"watching what I want, when I want, and where I want". This transition from linear, time-slot based consumption on TV to 24x7 on-demand, nonlinear binge-watching across a wide array of connected devices such as desktop, laptop, tablet, smartphone, and television has led to a significant uptick in "Cord Cutters" and "Cord Nevers".

The new wave of disruption in the media industry is forcing leading media companies to reinvent their business model. These companies are opting for the merger and acquisition route to gain greater access to large customer bases and stay relevant and competitive against the OTT players who are taking significant market share from incumbents.

In the race to provide premium original content at a breakneck pace, the seven-decade-old model of siloed content creation, aggregation, and distribution has and is horizontally integrating (see Exhibit 1). OTT players like Netflix and Hulu are already following a model of horizontal integration. They have collapsed the content creation and aggregation business by producing their own content and have democratized the distribution channel by leveraging the TSP-provided data pipe for content distribution. 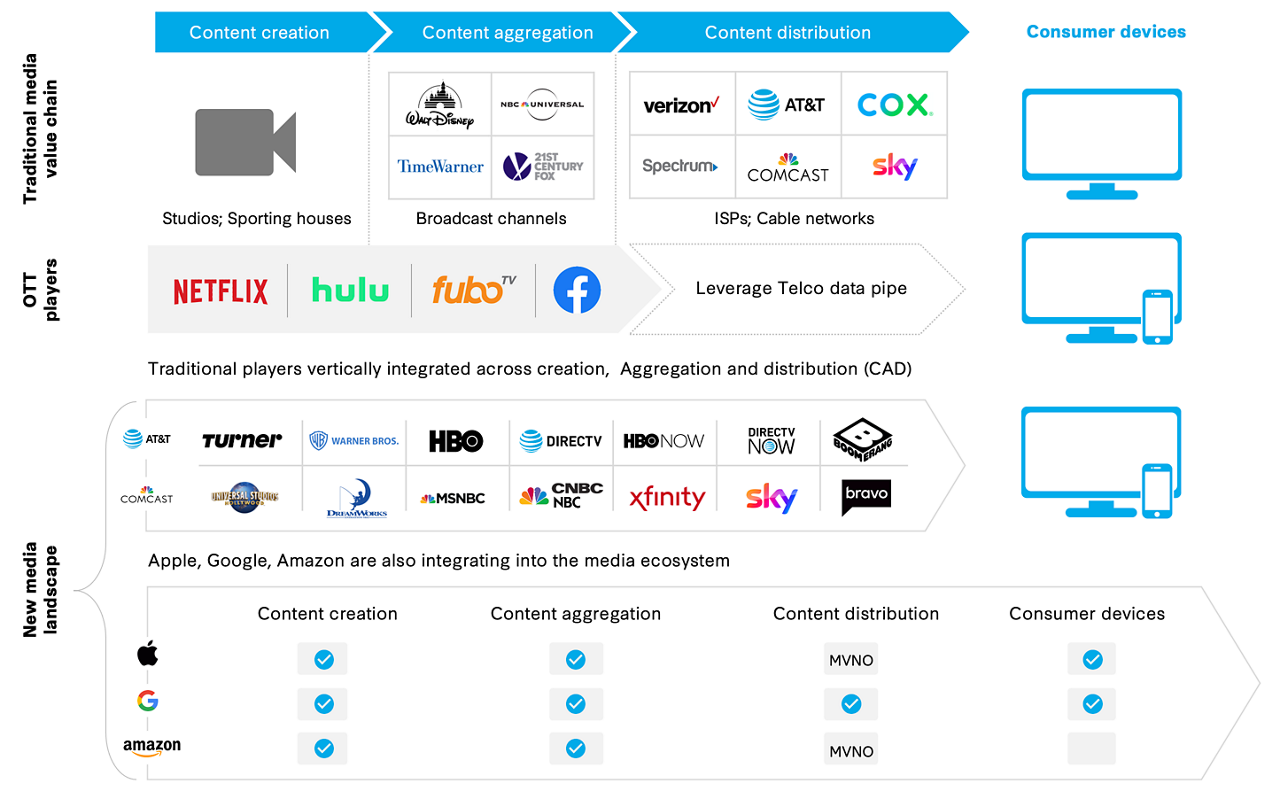 (*On 22nd September 2018, Comcast outbid 21st Century Fox for the purchase of UK broadcaster Sky. Sky had earlier planned to launch its service through its Sky Q platform, which would allow viewers to access pay TV channels and on-demand content without needing a satellite dish.)
Exhibit 1: The New Media Landscape

Given the success of media OTT players, many media houses are looking to launch their own streaming services to get direct access to their consumers. Disney, for example, will be launching its streaming service in the coming months. The direct-to-consumer business model is an epic leap that will transform the media industry from multi-tier B2B2C model to direct-to-customer B2C model.

Tech giants like Google, Apple, and Amazon (rumored to launch a smartphone in late 2018) are taking horizontal integration a step further by assimilating mobile devices into the media value chain. This gives them full control over their respective media ecosystems. From a content perspective, Google has YouTube, Amazon has Amazon Prime, and Apple plans to launch its own streaming service soon. For distribution, Google can utilize its Project-fi or Google Fiber network, while Apple and Amazon can operate as Mobile Virtual Network Operators (MVNOs) by white-labeling the telcos.

Soon, the media landscape is expected to become widely fragmented with multiple streaming services from telcos (AT&T, Comcast), FAANG, OTT players like Netflix and Hulu, and big media players like Disney. Content licensing across streaming service providers will be significantly reduced as content will be the key differentiator and core asset in the horizontally integrated media value chain.

Small media players who are left out of the horizontally integrated model will find it increasingly difficult to navigate this new ecosystem. These players will have to reinvent the way they have been doing business and rewrite the rules of content creation, aggregation and distribution. Their survival depends on:

Using digital technologies (e.g., data analytics) for the right content to reach the right customer segment;
Identifying the customer journey and associated touchpoints to ensure that customers can consume content across multiple devices/touchpoints, and
Licensing their content to media giants in a converged industry.

For more details, see our whitepaper

The secret sauce for a successful cloud strategy: Cloud operations and governance